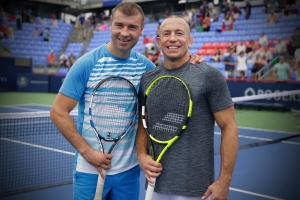 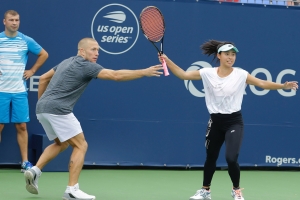 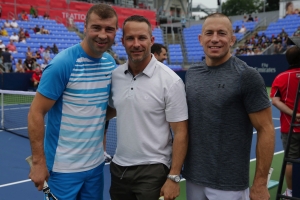 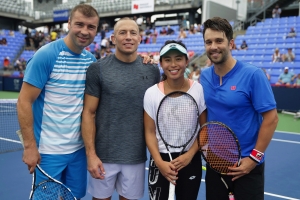 Montreal, Friday, August 3, 2018, Georges St-Pierre and Lucian Bute traded in their fighting gloves for a colourful tennis match during the first weekend of the 2018 Rogers Cup!

The two athletes from the combat sports world (AMM and Boxing) had the opportunity to take part in a friendly match, teamed up with WTA pros Carol Zhao and Rebecca Marino.

Under blue skies, the two athletes exchanged racquet shots with other well-known personalities such as Jean-René Dufort, Mariana Mazza, Alex Barrette and Jean-Thomas Jobin. This afternoon marked the beginning of the family activities surrounding the Rogers Cup.

In addition to sharing a few matches with the WTA stars, Georges St-Pierre and Lucian Bute attended the a few matches from this tournament that will take place during the next two weeks in Montreal.

This great tennis event allowed the popular figures of Quebec fighting sports to be seen in a different light, exchanging many smiles as well as engaging in a solid battle on the National Bank Court of the Rogers Cup.