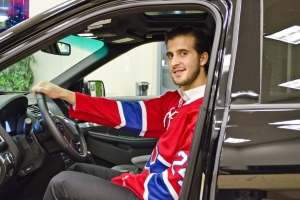 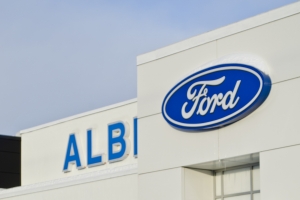 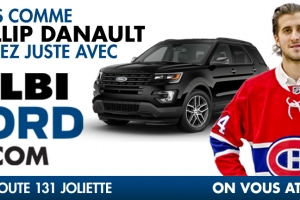 Mascouche, QUEBEC - January 13, 2017 - It is with great pride that ALBI Le Géant Group announced today that ALBI Ford Joliette, one of the Group's 25 dealerships, has become an official sponsor of Montreal Canadiens forward Phillip Danault. This partnership, which was made possible through the involvement of Groupe MVP, is for a two-year period and includes the loan of a Ford Explorer model vehicle.

Phillip Danault is a die-hard hockey fan and has been playing the sport since his early childhood. He has played on various minor hockey league teams in Quebec, notably for the Victoriaville Tigers, his hometown team. He made his entry into the National Hockey League when he was drafted in the first round by the Chicago Blackhawks in 2011. In February 2016, he was traded to the Montreal Canadiens and now wears #24 with dignity.

"I am really happy that ALBI le Géant Group and ALBI Ford Joliette are giving me all this confidence and support. It will be with great pride and pleasure that I will drive the 2017 Ford Explorer, especially as it is my very first new vehicle! The ALBI Le Géant Group is truly an example to follow in terms of commitment and support for Quebec athletes, and I thank them warmly for choosing me," said Phillip Danault.

"At ALBI, supporting athletes is part of our DNA and the ALBI Ford Joliette sponsorship offered to Phillip Danault adds to a long list of initiatives that we are very proud of. As a big Montreal Canadiens fan myself, it gives me even greater pleasure to support Phillip Danault and we wish him the best of luck for the duration of this season and hopefully all the way to the playoff finals!" said Denis Leclerc, President of ALBI the Giant Group.

Over the years, ALBI le Géant Group, through its head office or one of its dealerships, has donated several thousands of dollars in donations or sponsorships to athletes and sports associations such as Tennis Québec or Les Cobras de Terrebonne, a team that competes in the Junior AAA hockey league. The Group firmly believes in corporate social responsibility and regularly acts as an agent of change in the various communities where it operates.

For more information or to coordinate an interview, please contact :