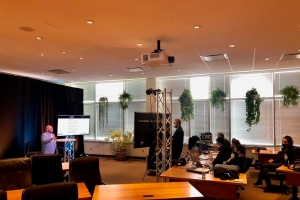 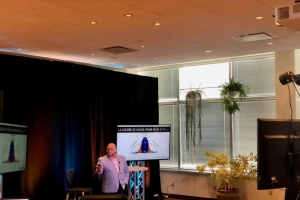 Montreal, Tuesday, November 3, 2020 - Sylvain Guimond was one of the designated speakers at the 10th edition of the Journée anuelle d'Aliments du Québec. Despite the fact that the event was in virtual form, the presentation was filmed live at the UPA house (Union des producteurs agricoles) in Longueuil. An event that brought together the majority of Quebec's agri-food business leaders.

Accompanied by host Josée Bournival, Sylvain Guimond had the opportunity to discuss the theme of the day which was "Here and now, performing in a new context". A relevant topic for all suppliers, producers and collaborators present at the conference. The speaker also did not hesitate to draw interesting parallels between the sports world and the business world.

The angle discussed had above all to do with change management, motivation, success and boldness. Adapted to the challenges brought about by the current pandemic, the conference was closely linked to the very particular reality of agri-food businesses. Despite the virtual format, participants benefited greatly from the many tips given during the event and left with considerable motivation for the months to come.