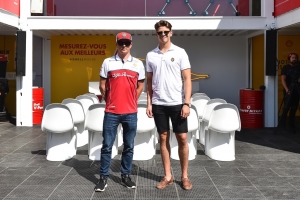 Montreal, Thursday, June 6, 2019 - The young sensations of the Montreal Canadiens, Jesperi Kotkaniemi and Ryan Poehling, were at the Alfa Romeo Shell House on the occasion of the Montreal Grand Prix. An initiative of Edelman Canada in collaboration with MVP Group Agency.

The Shell House was a space moved to the site of Circuit Gilles-Villeneuve that was specially designed for on-site fans. Several attractions such as car simulators were installed on the spot to the great pleasure of all. Several personalities were also present to chat with fans and take pictures.

Jesperi Kotkaniemi was spoiled by this event which allowed him to rub shoulders with many fans and meet Finnish drivers such as Valtteri Bottas and Kimi Raikkonen. For his part, Ryan Poehling was also able to take advantage of his experience by participating in several activities surrounding the Grand Prix such as the Peel Paddock to name only one. So it was a pretty pleasant time for them.

The young hockey players are enjoying a Montreal summer for the first time in their careers. It They have the opportunity to enjoy themselves without losing sight of their goals for the upcoming season.