Sélection Retraite repositioned its brand in early 2018 in order to appeal to future retirees, as well as their families. They opted to dwell on the past and revived the Quebec cult series "Lance & Compte" (formerly known as He Shoots He Scores in English Canada during the 1980s), in collaboration with Bite Size Entertainment and Groupe MVP. They asked for Montreal Canadiens GM Marc Bergevin and we made sure they got just what they expected.

"One lead we thought was interesting was to show that those who have experienced passions in their lives can continue to experience them when they arrive in residence," says Jean-Francis DuRocher, founder and chief strategist of Bite Size Entertainment. That's where we thought we'd revive the character of Gilles Guilbault, former general manager of the National team in the cult series Lance et compte, played by Michel Forget".

We see that Michel Forget continues to live his passion by giving advice to the general manager of the Montreal Canadiens, Marc Bergevin, who has agreed to participate in this commercial.

In existence for more than 30 years, Sélection Retraite develops, builds and manages 50 residential complexes for retirees throughout Quebec. Despite all these years of existence, brand awareness was a challenge.

"On the one hand, the industry is relatively young from an advertising point of view, even among competitors. On the other hand, it's only been three years since we started working on the brand," says Éric Vincent, Vice-President, Operations and Customer Experience, of Sélection Retraite. Since we were formerly known as Réseau Sélection, people had trouble identifying us in our industry, sometimes confusing us with the dating site brand Réseau Contact".

So the brand changed its name to Selection Retraite, "a much more meaningful and representative word for the retirement universe we offer."

The goal was to put the brand in the forefront of Quebecers' decision-making process when they explore possible avenues in residence. "Figures show that more than half of the people who visit a first residence will settle there," he points out. That's why it's so important that the brand manages to make its mark upstream.

With this new positioning also came a new ambassador: Michel Forget. "We couldn't have found a better voice for our residences: it's rare that a spokesperson has such a broad reach in terms of the public and over such a long period of time. He enjoys a very strong capital of sympathy."

Participate in the competition for the best Bye Bye 2018 ad before January 6th and vote for the Retirement Selection ad: https://ici.radio-canada.ca/concours-byebyepub/ 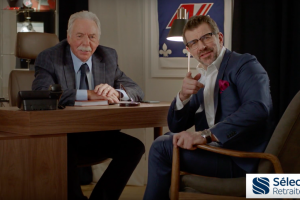 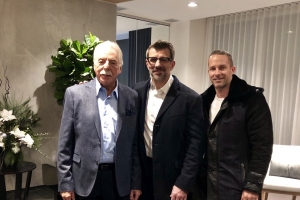